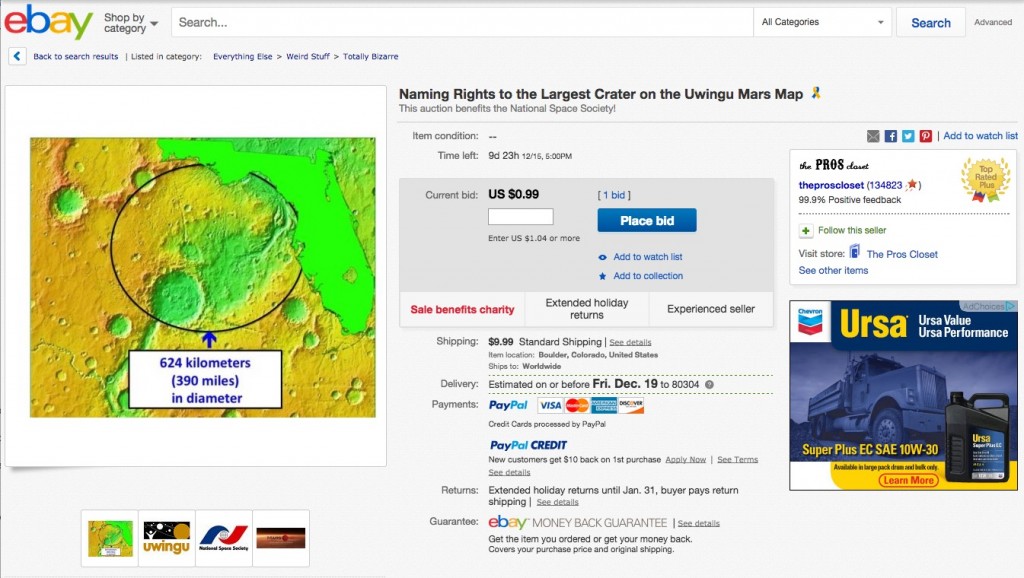 Looking for an out of this world holiday gift opportunity or an incredible marriage proposal or anniversary idea? For the next 10 days, eBay and Uwingu have partnered to give anyone the opportunity to naming rights for the biggest unnamed crater on Uwingu’s Mars map—a first of its kind auction.

With over 14,000 craters named on it by the public in 2014 alone—more than ten times the number named by scientists in the past 50 years, Uwingu Mars’s map is becoming a de facto standard as the most complete map of Martian craters.

As with all Uwingu efforts, 50% of the proceeds will go to Uwingu Fund sales to support space exploration, research, and education grants. For the eBay auction, the National Space Society will be supported via eBay’s Giving Works program. The balance of the Uwingu Fund proceeds from the auction will benefit other grant recipients of the Uwingu Fund, including the Mars One project and other efforts to further space education, exploration, and research. See examples of past Uwingu grants at http://www.uwingu.com/the-uwingu-fund/currently-funded-projects/

The name given to the crater by the eBay auction winner will forever be recorded on our new map of Mars, and then sent to Mars by the Mars One project The winning winner will also receive a framed certificate of naming, two (2) VIP passes to the Mars Insight mission launch—NASA’s next Mars launch, and a handsome desk globe of Mars valued at over $300.

“Our goals at Uwingu are to get more people excited about space exploration, and to fund space exploration, research, and education projects via this new private sector way,” said Uwingu’s CEO, planetary scientist Alan Stern. “There are still almost 500,000 unnamed craters on our people’s map of Mars.”

In addition to bidding on the eBay auctioned crater, enthusiasts, gift givers, and supporters are encouraged to go online at www.uwingu.com and support Uwingu’s goals by naming smaller and mid-sized craters as holiday gifts to loved ones, friends, and coworkers. Prices range from $5 to $5,000 depending on crater size.

Uwingu founder and CEO, Dr. Alan Stern is available for interviews about this auction immediately. Contact him HERE.