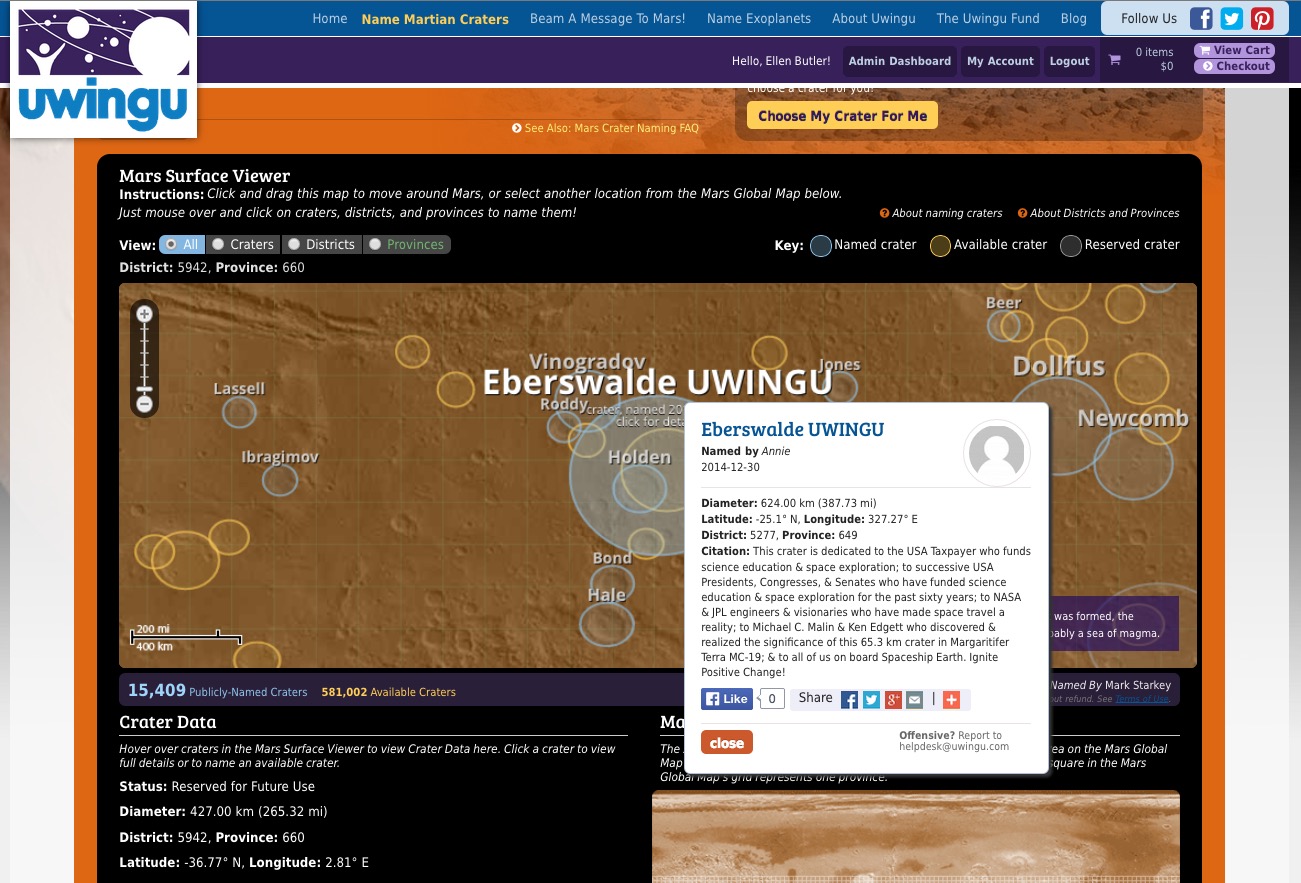 Eberswalde UWINGU crater on Mars is about the size of the state of Florida, and is larger than 60% of the countries on Earth!

Last month, in celebration of the 50th anniversary of the first mission to Mars, NASA’s Mariner 4, launched in late 1964, we teamed up with eBay to auction the naming rights to the largest unnamed crater on the Uwingu Mars map. The crater is at Latitude: -25.1° N, Longitude: 327.27° E

This map is the official Mars map of the private Mars One project and will also be carried to Mars by Mars One’s first robotic lander, planned for 2018. Bidding concluded on Monday December 15th.

Sixteen eager bidders competed for the chance to win this opportunity. Ian Harnett, rock star of Uwingu with about 500,000 square kilometers under his belt won the final bid at $2020!

Ian, who writes under the pseudonym ‘Annie’, named the large crater: Eberswalde UWINGU, with the following citation: “This crater is dedicated to the USA Taxpayer who funds science education and space exploration; to successive USA Presidents, Congresses, and Senates who have funded science education and space exploration for the past sixty years; to NASA and JPL engineers and visionaries who have made space travel a reality; to Michael C. Malin and Ken Edgett who discovered and realized the significance of this 65.3 km crater in Margaritifer Terra MC-19; and to all of us on board Spaceship Earth. Ignite Positive Change!”

This auction contributed to space research and education grants provided by Uwingu, and by the National Space Society, an independent, educational, grassroots, non-profit organization dedicated to the creation of spacefaring civilization, via eBay’s Giving Works project.

Uwingu’s mission is to engage people with the sky and space, and to assist in funding efforts that will continue to push the envelope on space science and education, and which further exploration of the universe.

Ian invites everyone who believes in science education to join him and many others on the surface of UWINGU Mars.

Uwingu was founded by space experts, former NASA executives, and business people that have a passion for space. The funds raised by Uwingu projects help fund future projects and “The Uwingu Fund“, which fuels grants to help much needed funding for space education, research, and exploration.