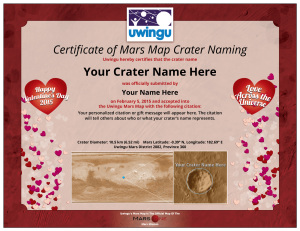 Say “I Love You” With A Mars Crater Named for Someone Special—And Make a Real Impact on Them!

We have a new way to honor those you love for Valentine’s Day—with a crater name on our new Mars map being created for the Mars One private space mission.

As a part of this, we are offering a special Valentine’s Day certificate for anyone to honor those they love. Recipients will never forget it! Prices begin at $5.

Said Uwingu’s CEO, Alan Stern, “We’re all about engaging people in space exploration in new ways. What could be more special than Valentine’s Day?”

Uwingu is a for-profit, public engagement space company based in Boulder, CO, led by senior planetary scientists and astronomers. Uwingu’s twin missions are to connect the public to space and space exploration in new ways, and to create a grant fund to support a wide range of space efforts by individual space researchers, educators, and organizations.

Uwingu’s Mars Map Crater Naming Project at www.uwingu.com allows anyone with a connection to the Internet to help name approximately 590,000 unnamed, scientifically cataloged craters on Mars. The project aims to ultimately raise up to $10M for Uwingu’s grant fund.